The Basics on Threads of stainless steel Fittings, Valves and Flanges:

There are various types of connection designs for pipes, fittings, valves and flanges. The most popular and common type is the thread end design, due to its simple installation properties. The following table provides an overview of the main thread standards used for threaded fittings, pipe fittings, valves and threaded flanges:

What is the main difference between the American (NPT) and British/European Thread?

Threads can be grouped into two main categories. There are threads that have a 60° angle or a 55° angle. Threads according to American NPT standard have an angle of 60° while those of British/European standard have an angle of 55°. The two kinds of thread are incompatible due to the differences in their thread degrees. Because of the difference in thread angle there will also be a difference in thread per inch. Threads can be tested and classified with either a plug gauge (Female Threads) or a ring gauge (Male Threads) to determine of the thread has a 60 degree or a 55 degree angle.

There are several different standards within the British standard, therefore causing a lot of industry wide confusion. Installers and engineers are easily confused on threads according to DIN 2999, EN10226, ISO7, ISO228, and BS21. The German standard DIN2999 was obsolete and is replaced by the ISO7 Standard. The standard DIN 259 is the same standard as the thread standard ISO228. The European standard EN10226 is based with editorial modifications on ISO7, giving the threads the same gauging system. The BS standard threads are the BS 2799 and BS 21. The BS 2799 has been withdrawn and replaced by ISO 228. BS 21:1985 is technically equal to ISO 7, however the gauges design for the tow standards are different. When using a ISO 7 gauge to test a BS21 thread, the gauge will fit, while the other way around, the fit might not be perfect. Due to the different gauge design, some factory will have different machining tolerances on the two standards, to fit both standards. This makes further argument on whether BS 21 is equal to ISO 7 or not. Threads can further differ in being either taper or parallel. Tapered threads have walls that would, if continued, eventually meet, while parallel threads have thread walls which are straight. 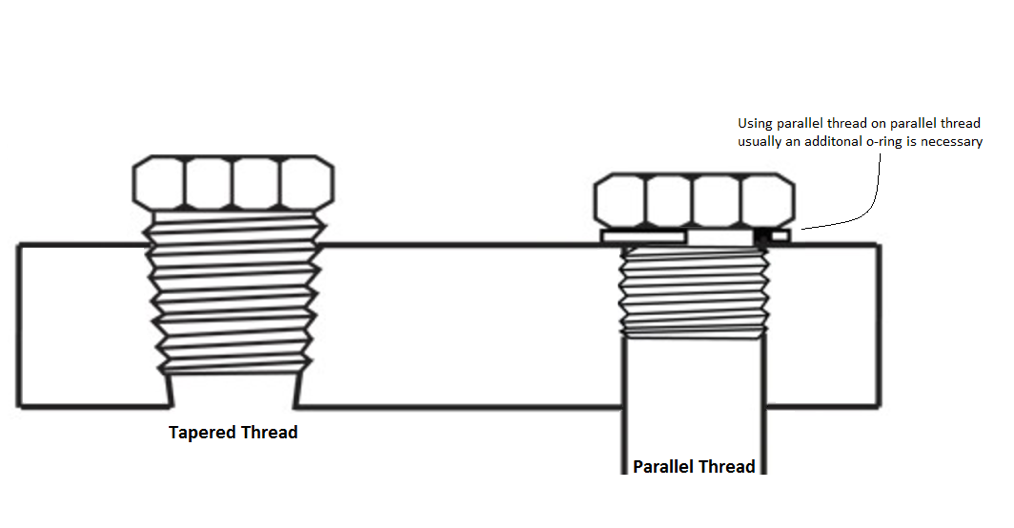 Threads according to ISO 228 do not create a pressure tight seal on the thread. A sustainable seal is created through the force pressed on a sealing surface, such as when installed with an O-ring. Example for fittings with an ISO 228 thread are stainless steel running nipples, hexagon nuts, and plugs according to DIN 910.

Both the female and male thread in the NPT thread standard are parallel and the pressure tight joint is created on the thread. To create a pressure tight connection, it is recommended to use silicon tape or Teflon tape. Example of fittings with an NPT thread are welding nipple, barrel nipples, elbow, and hexagon nipples.

We offer the following payment methods.